'Surveys from a Small Island' opens August 26 in Ipswich

Seven Photography and Graphic Design students from UCS and Senior Lecturer in Photography Heike Löwenstein invite to the Opening of Surveys from a Small Island – An exhibition inspired by New York on Friday 26 August from 3-6pm. The show continues in the Foyer of the Waterfront Building until October 16.

The work was created during a student trip to New York in June, in response to the city and to Löwenstein’s exhibition Surveys of a Small Island curated by meatyard arts that was showing at the same time.

After a ‘pop-up’ exhibition on the Highline on their last evening in New York the group now shows a considered selection of work from New York as well as visuals and objects that have been created in response to the visit by two Graphic Design students, Yvette-Marie Ormsby and Jonanice Kitt. The photographic surveys range from matchbox pinhole photographs of Coney Island by Tom Rose to quiet observations of private moments performed in public by Caroline Guthrie, comments on people working in service of others by Neil Salter and large format polaroids of the Highline by Natalie Martin. Kristine Diza has decided on a grid of images of a day out in New York and Löwenstein will show experiments with vertical panoramas that challenge viewing conventions. Tom Rose and Andrew Biddulph (who remained back home) collaborated on a visual contemplation of time and space, shot in New York and the UK at the same time.

The development of the exhibition has been facilitated through the blog of thenetwerk®, the photography research group that Löwenstein has founded with colleagues in 2008.

The exhibition may encourage and inspire all current students to create more surveys of the (small island) UK, which could be exhibited next year in New York – just an idea … 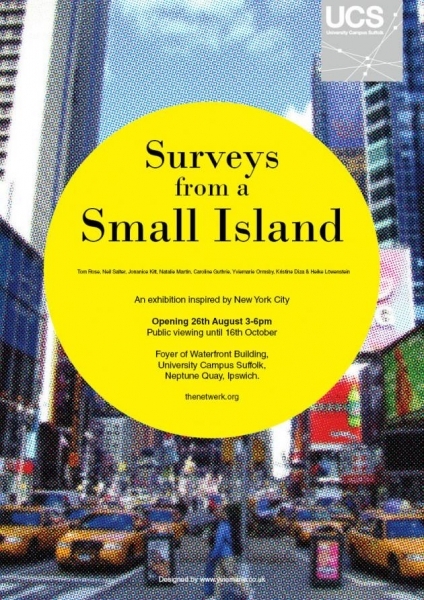